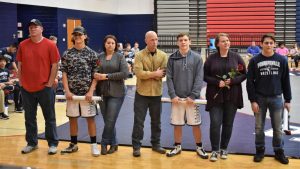 Congratulations to Powdersville Varsity Wrestling on their 58-24 region victory over Pendleton and their 56-22 non-region victory over Pickens on Thursday, January 17, 2019. The event was the last home dual match of regular season, and Patriots celebrated the accomplishments of seniors Andrew Bell, Justin Hogan, and Jozmar Rivera at the beginning of the match.

Powdersville (24-9 overall, 3-2 in the region) will compete in Round 1 of dual Playoffs on Saturday, February 2. Members of Powdersville Wrestling will compete in the Region 1-AAA Individual Championships on Tuesday, January 29, at West-Oak High School. Time for all this hard work to pay off!  Best wishes to all our Patriots!  #MakingHistoryEverySeason! #GoPatriots!!