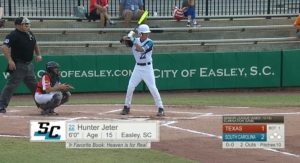 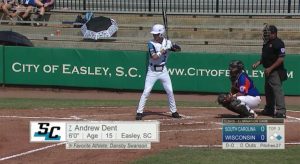 Twelve teams from around the world converged upon Easley, South Carolina for the last ten days for the ultimate goal of crowning the Senior League World Series Champions.  Two of our own Powdersville Patriot baseball players, Andrew Dent and Hunter Jeter (both rising Juniors), represented on the South Carolina District 1 team and made quite a run.  The SC D1 team went 3-2 losing its first game, but going on to win its next three games before it fell to the West team from Hawaii in the United States Championship game. The West team went on to win their final  game and become the SLWS champions.

Both Andrew and Hunter made their marks on the field.  Andrew, who pitched and played center field, lead the team with a batting average of .545 for the series. He stated, “It was a great experience and one I’ll always remember.  Great group of guys and I had lots of fun playing with them as well as meeting the other players from other teams. Every game was just full of intensity and that’s something that will always be one of the best experiences I’ll ever have.”

Hunter, who was featured in the No.1 play on ESPN’s Top 10, had a great series in the field at third base.  Hunter reports, “It was the best experience of my life, meeting the other teams and playing them. The atmosphere while playing in the games was crazy and I loved every moment of being in the World Series.”

We look forward to seeing these boys back on the field in the spring playing for the Patriots under new Head Coach Wade Padgett. Great job boys – we are so proud of you!