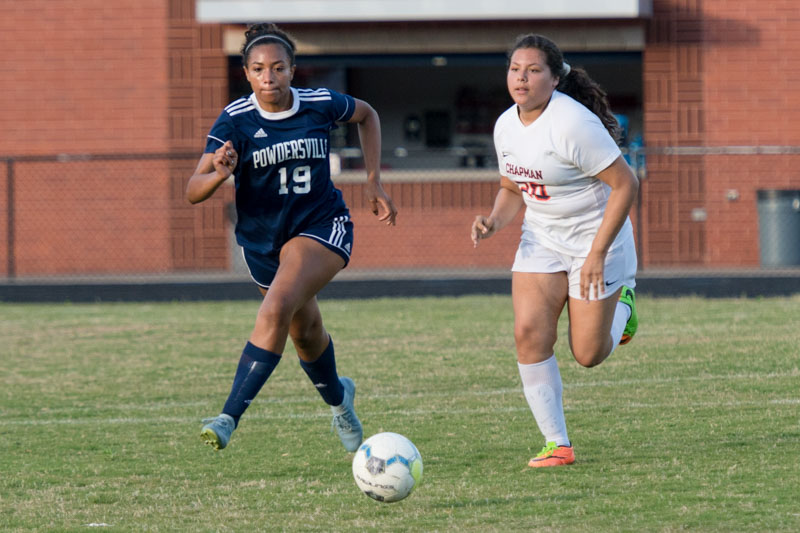 Elite Eight! Congratulations to Powdersville Varsity Girls Soccer on their 6-0 second round playoff win over Chapman at home on Wednesday, May 1, 2019. Lady Patriots scored early and often to seal the victory and advance to the third round of playoffs.

In the eleventh minute, senior Bry Thobe drove toward the goal and quickly dished off to freshman Sydnee Barrett who nailed the net from eight yards. Ten minutes later, Chapman accidentally put in an own goal. Barrett finessed a defender and hit her second goal from close range unassisted three minutes later. Next up, sophomore Madison Lance sailed a 20-yard shot that swished the opposite side of the net on its way down and put the Lady Patriots up 4-0. In the last minute before the halftime whistle, Barrett nailed her third goal (HAT TRICK!), this time off a cross from sophomore Madelyn Thobe, and extended the Lady Patriots’ margin to 5-0 at the break.

Defense prevailed for both teams through much of the second half. With 10:20 remaining in the game, freshman Mayci Irby booted the ball from 30 yards high into the back of the net to seal the deal 6-0 for Powdersville. Senior keeper Jeanette Campbell directed the Lady Patriots’ defense for their 12th shut-out of the season.

Powdersville advances to the “Elite Eight” of Class AAA Girls Soccer and hosts Indian Land for the third round of playoffs on Friday, May 3, at 6:00 pm. Indian Land, defending Upperstate Champion from 2018 and State Champion from 2017, won their region this season, then defeated Pendleton 6-2 and Mid-Carolina 2-0 in playoffs. Lady Patriots could use a big crowd of cheering fans! Powdersville has an undefeated 16-0 record for the season, and Friday will be their last home game. Come out and support our Lady Patriots!! #MakingHistoryEverySeason! #Go Patriots!!