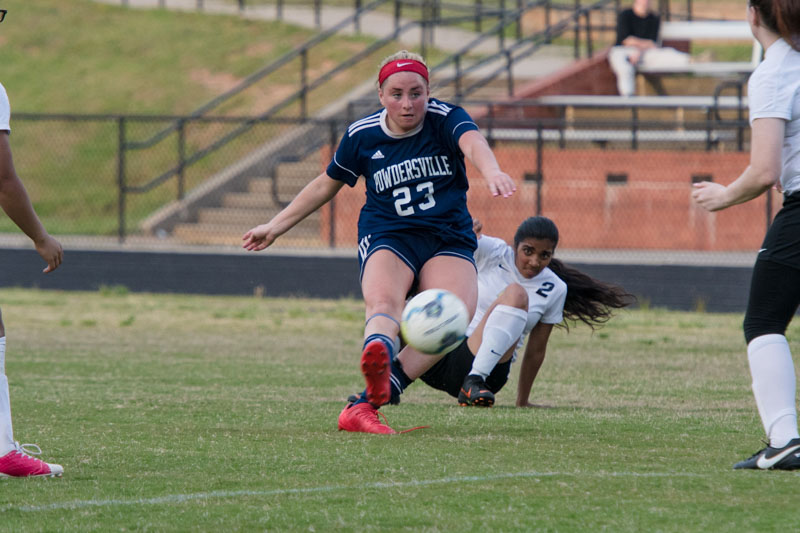 Congratulations to Powdersville Varsity Girls Soccer on their 12-0 first round playoff win over Fairfield Central at home on Monday, April 29, 2019. Lady Patriots controlled the momentum much of the game as they rolled to the big win.

In the twelfth minute, senior Bry Thobe worked her way through Fairfield Central’s defenses and hit the net from 13 yards. Three minutes later, freshman Natalie Johnson turned a ball a millimeter from the back boundary and crossed it to sophomore Madelyn Thobe who nailed the net. Next up, sophomore Madison Lance put a ball in from the six. Freshman Kaiden Radcliff rebounded an elder Thobe shot to put the Lady Patriots up 4-0, and Lance drove in her second goal a few seconds before the whistle for a 5-0 halftime lead.

Ten minutes into the second half, sophomore Gina Cooley outmaneuvered the keeper and shot to an open net. Bry Thobe hit a pair of shots (HAT TRICK!) by finessing past defenders and shooting inside the 18. Next, freshman Mayci Irby drove around the side, squared up to the net and put the Lady Patriots up 9-0. With less than three minutes remaining, freshman Natalie Johnson found the net twice from less than 10 yards. Irby squared up again in the final minute for her second goal and a 12-0 margin for Powdersville. A busy offense helped senior keeper Jeanette Campbell collect shut-out #11 for the Lady Patriots.

Powdersville (15-0 overall, 8-0 in the region) hosts Chapman in the second round of playoffs on Wednesday, May 1. Chapman finished the season as the #2 team in Region 2-AAA and defeated Clinton 6-0 in their first-round of playoffs. Should be an exciting game! Come out and support our Lady Patriots! #MakingHistoryEverySeason! #Go Patriots!!