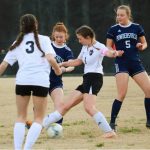 The Lady Patriots won their first region game against Crescent on Monday night. Both teams played hard but the Lady Patriots prevailed. After a scoreless first half, Natalie Johnson found the back of the net to put the Patriots up 1-0. Then later on in the half, Patriots crashed the net after a cross from